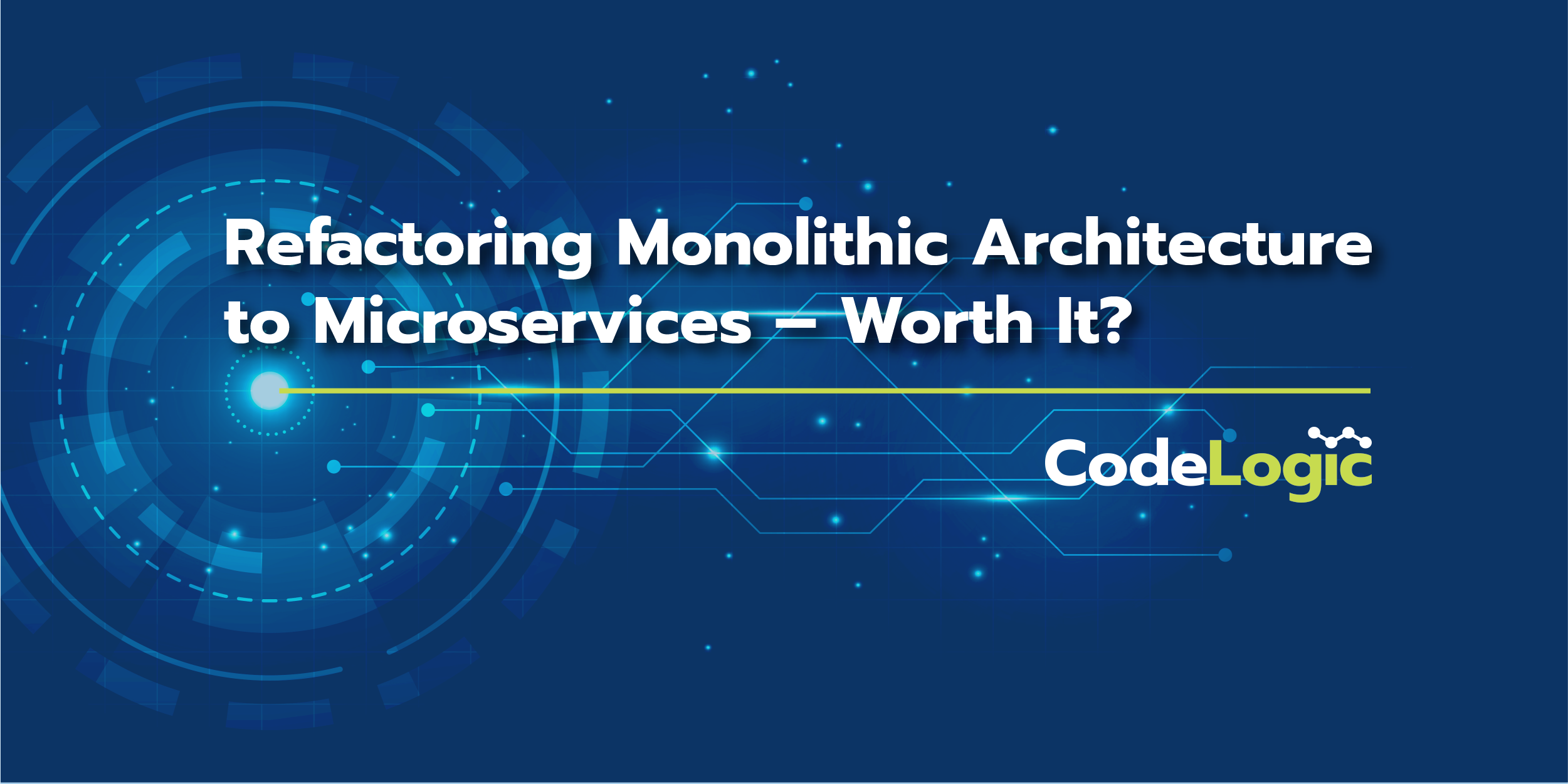 Refactoring Monolithic Architecture to Microservices: Worth It?

There’s a lot of hype around microservices in the developer world. Engineers are repeatedly being told that breaking up their product or service code into smaller, more digestible parts is the smartest, most efficient way forward. But while the more traditional monolithic architecture is falling out of favor for organizations developing cloud apps, teams may be jumping on the microservices bandwagon too quickly and risking an ill-fitting strategy for their end product and business goals.

Microservices can be complicated and aren’t necessarily appropriate for every development project. So, before committing to one approach, we’ve taken an in-depth look at both monolithic architecture and microservices, discussing when they should be used, why, and if refactoring is worthwhile.

Monolithic architecture is when an application is designed as a single, self-contained unit. Components of software in this instance are connected, meaning that each component has to be present for the code to function. When changes are made to monolithic architecture, there can be unintended consequences that affect other parts of the application. Typically, there is one team responsible for creating and managing the monolithic application.

An example of a monolithic architecture could be an e-commerce SaaS platform that contains components including a web server, an ordering system, a payment function, and a shipping service.

Microservices exist when a single application has multiple, loosely connected, and independently deployable units. These units tend to be smaller in size than a monolith architecture and have their own technology stack—meaning that changes can be made to them without causing disruption to other parts of the application. Sometimes referred to as “cloud-native,” microservices communicate with one another via APIs.

Amazon, Netflix, and Uber all use microservices in their IT initiatives.

One survey found that 61% of businesses have been using microservices for a year or longer. Part of the reason for its popularity is that microservices enable companies to scale up their tech infrastructure relatively easily. For growing companies, this flexibility means they can continue operations when surges occur, and spin up copies of components in the event of a failure. As a result, application functionality and the user experience remain smooth, whatever the demand.

Another benefit is that smaller teams can work on the smaller components of microservices, where they have greater autonomy to make direct changes and hyper-focus on their area. 10 teams of 10 people are more effective than one team of one hundred people, and with the added layer of APIs, smaller teams can still coordinate and consider the overall application.

Microservices additionally promote capability reuse in organizations. For example, a service built for one application may be useful elsewhere and can be swiftly duplicated and applied. Developers are therefore saved the time and effort of having to manually duplicate code.

Monolithic architecture is considered traditional infrastructure for a reason. It’s simpler and more condensed than microservices, so it gives organizations one, central place to oversee operations. For businesses and team leaders, that means fewer moving parts to manage.

For companies that are starting a project from scratch, monolithic applications can make more sense because it’s easier to test and debug. Tracking and monitoring performance in a monolith is also simpler because everything is in one place.  On top of that, development is simpler because the application as a whole can be picked up and placed onto a new server in order to improve scalability.

Reasons For and Against Refactoring Monoliths to Microservices

Global digital transformation has seen products and services rapidly scale while still remaining flexible enough to iterate. Microservices are ideal in these scenarios because they’re agile and allow for effective changes at a quick speed, with the ability to innovate while expanding.

Microservices also make sense if organizations want to rewrite legacy applications in contemporary programming languages and tech stacks in order to be more compatible with other solutions. Likewise, businesses that have standalone functions that are used across a range of channels should switch to microservices—for example with login and authentication facilities.

Refactoring to microservices is a big move and should only be undertaken when teams are sure that the benefits outweigh the expected costs and disruption. Although a rising trend in software development, not all applications function better when broken into microservices.

Microservices make a project more complex due to their distributed nature, but if a business isn’t addressing complex issues, there’ll be a clear misalignment. Similarly, if companies don’t have the team size and coordination to handle microservices, the architecture won’t prove useful.

The most successful microservice adopters are product-based companies that have run multiple iterations before achieving a product ready to go to market. In short, microservices are best suited to organizations that have already found a clear solution to a particular problem.

If an organization is considering microservices but doesn’t want to commit in full, they can instead consider an incremental approach known as the Strangler Pattern, whereby a new system is gradually created around the edges of the old architecture (rather than rewritten completely). The new system slowly grows until the old one is “strangled” and made redundant. This approach allows for a more seamless migration to microservices, with the ability to roll back if needed.

How Dependency Mapping Can Help

Any organization that decides to take the leap to microservices needs to prepare beforehand. Analyzing which parts of an application are ideal candidates for refactoring to Microservices can result in having to review thousands of lines of code. This analysis usually involves seeking answers to questions such as:

Essentially, an understanding of how all the code in the application fits together is needed before any refactoring decisions can be made.


In the same way that you wouldn’t pay for and start a home renovation project without first understanding the condition of the ceilings and roof, where the gas, water, and electric utilities are located, and which walls are load-bearing and which are not, the move to microservices shouldn’t happen without dependency mapping.

Dependency mapping identifies all the entities (classes, methods, and databases) within an application and arms technology leaders with relationship and connection insights. Mapping can reveal the bigger picture and highlight the potential impact of changes. Such a detailed visualization is key to saving time and money, and to reaffirming if microservices really are the right step for your business.

Microservices may be the trendy application architecture for development teams, but that doesn’t signal that it’s optimal for everyone. Companies thinking about refactoring their apps should conduct due diligence in advance and embrace dependency mapping to confirm that they’re making the best decision.

CodeLogic provides the industry's most comprehensive dependency mapping solution, empowering teams to fully understand the connections and dependencies in their applications.

To take a closer look at the benefits of application mapping and learn how it can help developers analyze code to identify good microservices candidates, download our free eBook: Top 5 Answers for the Developer.